Today, we look at when Batman and Catwoman first discovered each other’s secret identities.

I’m pretty sure someone requested this, but I can’t find the request. This is why e-mailing me is the best bet, folks, because I’ll always have a record of that, while it is harder if you just tweet at me or send me a note on Facebook. Those other things are fine, of course, but you’ll likely not get credit for your suggestion if you go that route. If you don’t care about that, then fair enough, keep on keeping on!

Anyhow, as you all know, the Batman/Catwoman romance has become a major part of the two characters’ identities the past decade or so, so let’s go back and see when these two lovebirds actually learned each other’s name!

RELATED: When Did Batman First Use Kryptonite Against Superman?

As soon as Catwoman debuted in Batman #1 (by Bill Finger, Bob Kane, Jerry Robinson and George Rousos), Batman and Catwoman had a flirtation going on, although one that exhibited itself in peculiar ways, like Batman threatening to spank her… 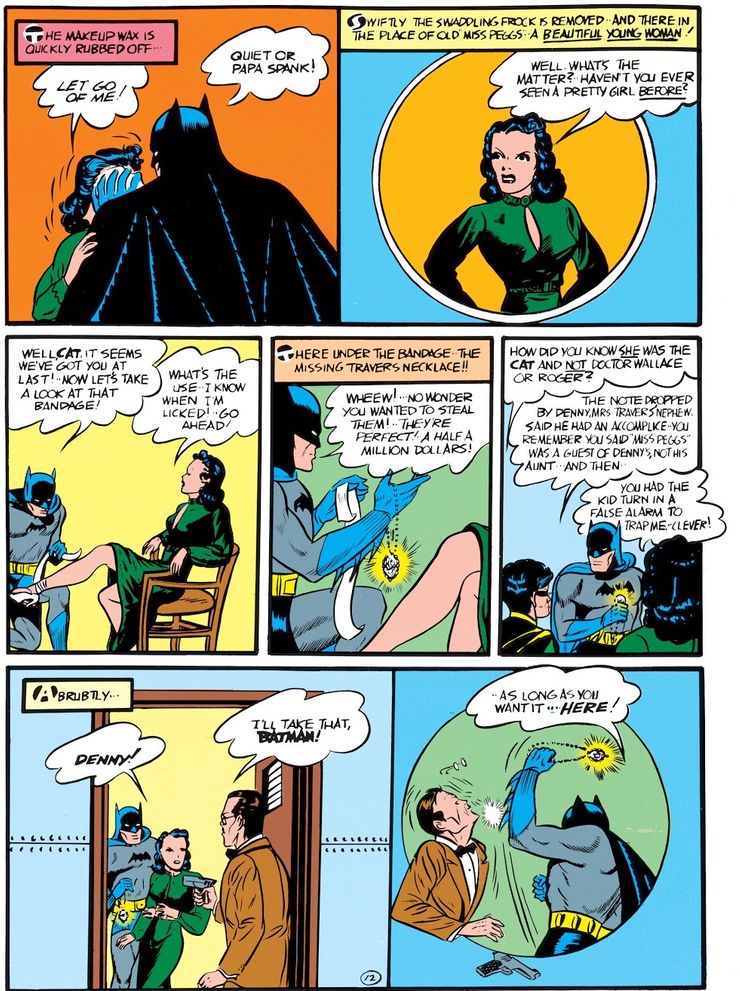 and just allowing her to escape capture… 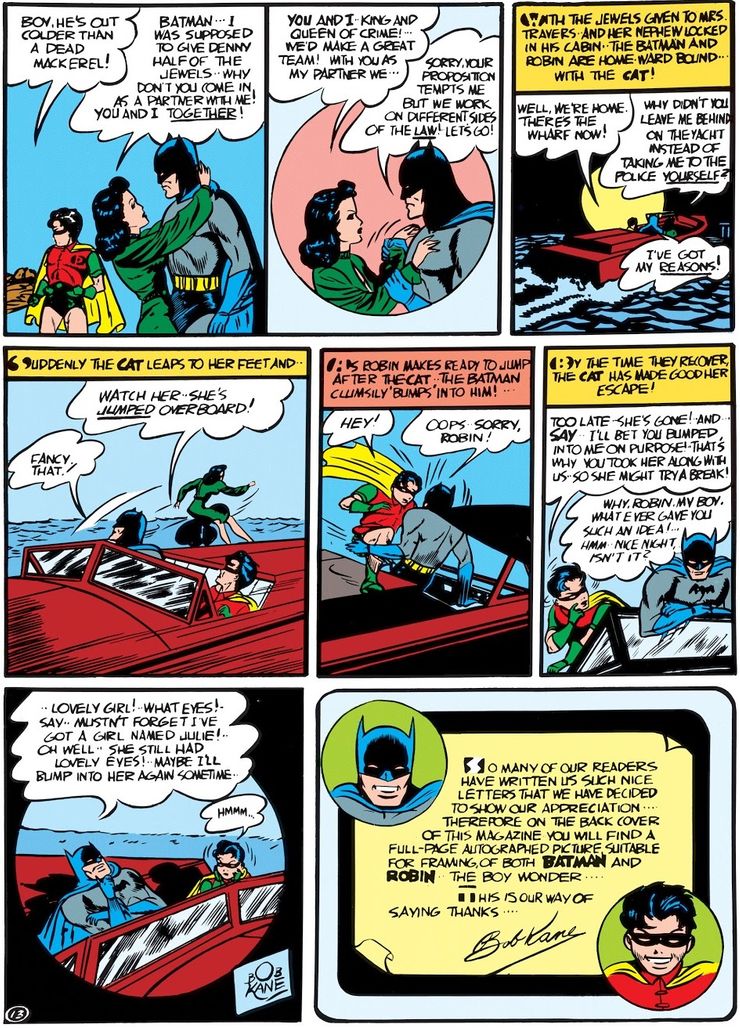 When Batman intentionally lets her get away at the end of the story, it is clear that Batman and The Cat/Catwoman are set to have a very unusual relationship.

Soon after their first meeting, they shared their first kiss in Batman #3 (by Finger, Kane, Robinson and Roussos)… 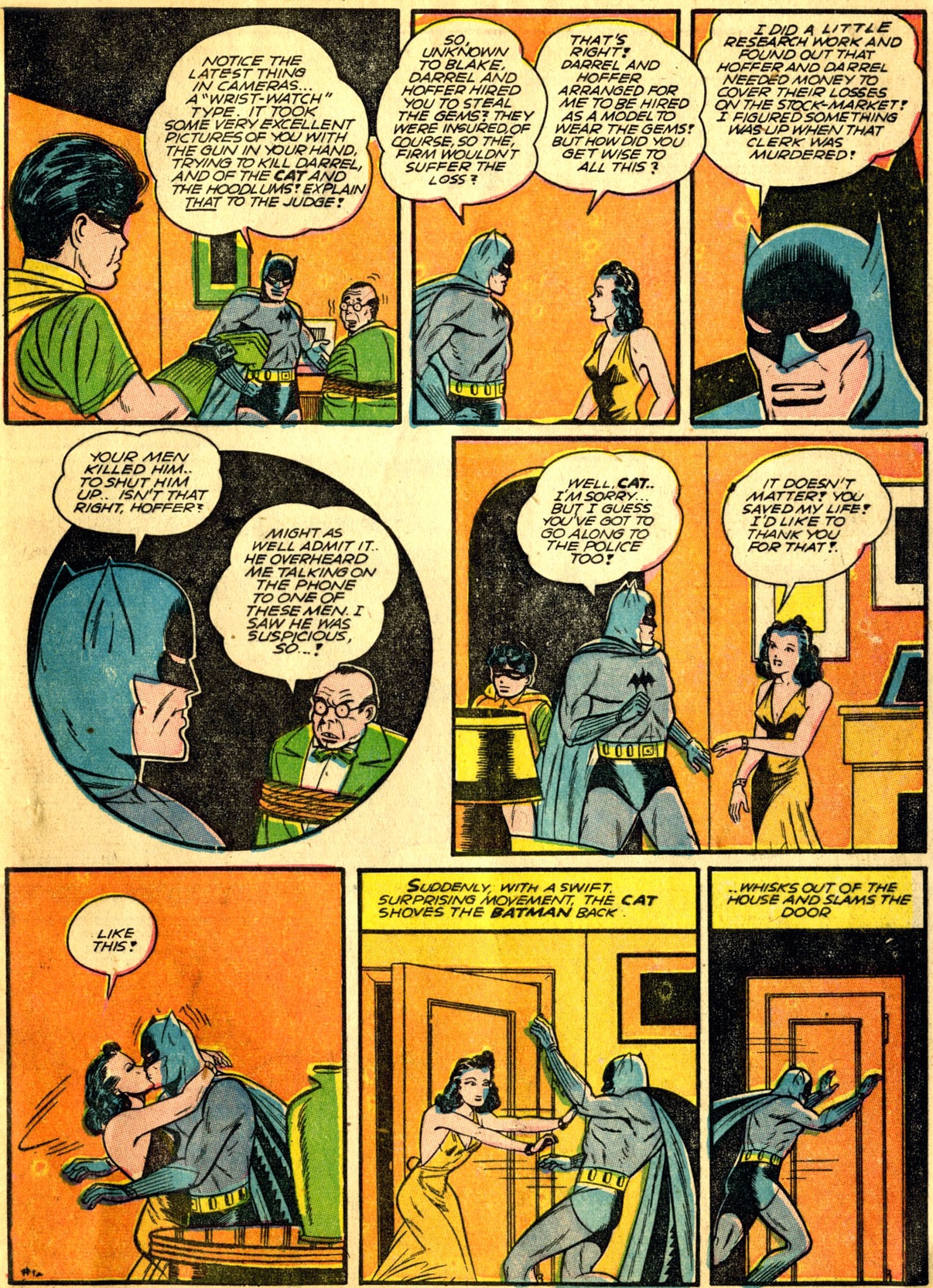 That story really set the mood for the type of stories they were doing at the time. Look at what that kiss does to Batman! 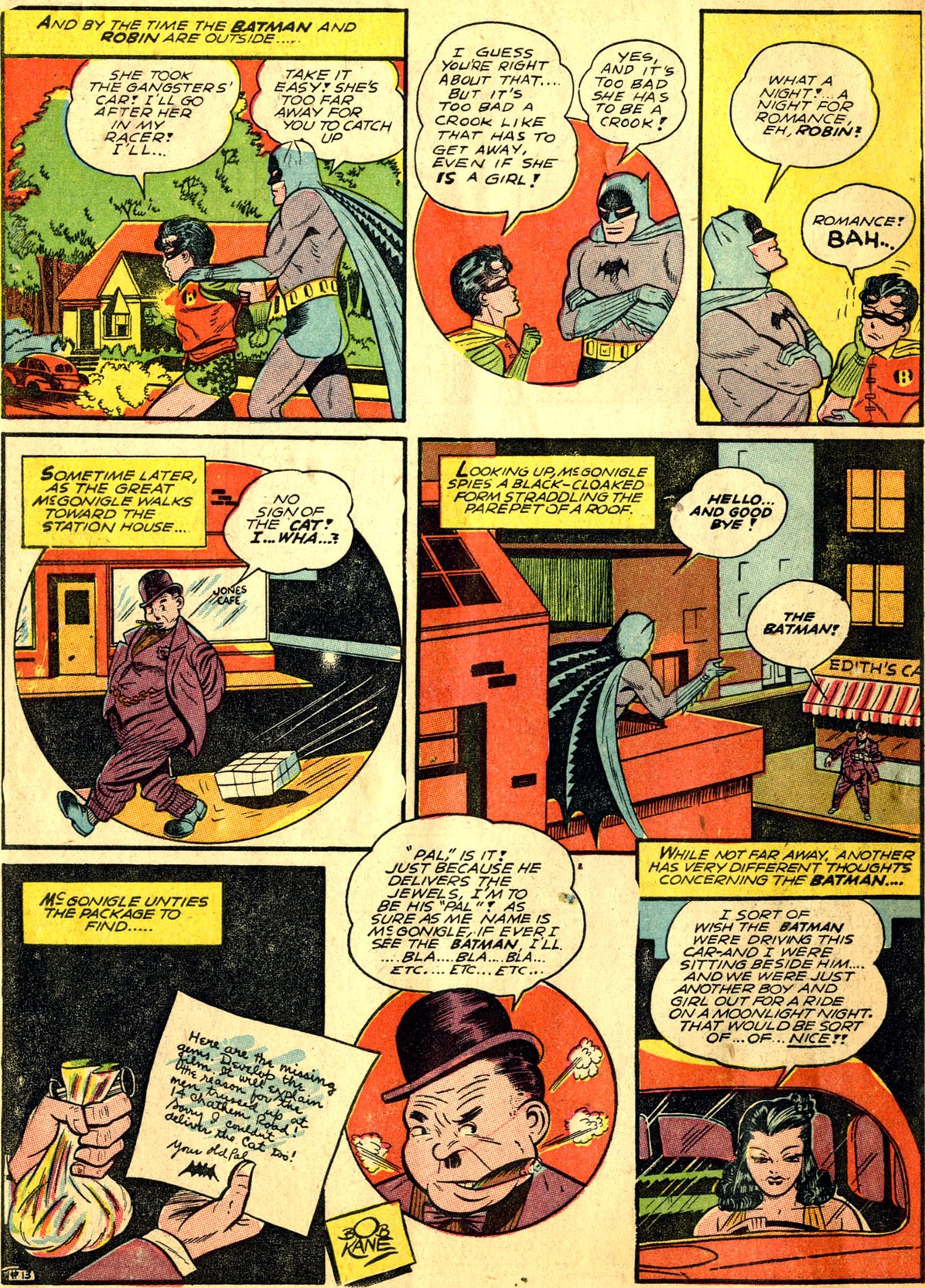 He’s like a lovesick teenager! Throughout the 1940s, the Bat and the Cat flirted with each other, but the funny thing is that she was just “Catwoman.” He was totally into her but didn’t even know her name! In Batman #15 (by Finger, Kane, Robinson and Roussos), we get the first “real” name for Catwoman, Elva Barr…

As Elva, she fell in love with Bruce Wayne…

However, it is clear that Elva is an alias and not her real name.

In Batman #22, in a story by Alvin Schwartz, Bob Kane and Jerry Robinson, she seduces ALFRED this time, using the alias Belinda…

We finally learn her real name in 1950’s Batman #62 (by Bill Finger, Bob Kane, Lew Schwartz, and Charles Paris), when Catwoman sees that Batman is about to be killed by a falling piece of a building. She knocks him out of the way, saving his life, but in the process suffers a head injury.

Her injury uncovers hidden memories of her life as Selina Kyle, a law-abiding flight attendant. She had suffered amnesia years earlier and had a psychotic break, where she became the villainous Catwoman.

At the end of the story, she retired as Catwoman.

Okay, so that’s how Batman learned Catwoman’s secret identity, how about the other direction?

RELATED: Flash’s Most Inventive Use of the Speed Force Is Wild – But When Did He First Use It?

After coming out of retirement a few times and then disappearing for most of the 1950s and 1960s, Catwoman was back to villainy by the end of the 1960s and during the 1970s, she had one of her most active decades in terms of being an outright villain. However, in 1979’s Batman #308 (by Len Wein, John Calnan, and Dick Giordano), Selina Kyle visits Bruce Wayne and announced that she was done as Catwoman and now that she was pardoned, she wanted to become a respected citizen. Wein soon had her become a love interest for Bruce.

In Batman #323 (by Wein, Irv Novick, and Bob Smith), Selina had to take up her Catwoman identity once more to clear her name of a crime that she did not commit.

Once she successfully did so, she remained as a costumed adventurer and hero.

Okay, so Batman and Catwoman sort of had a relationship and also, Bruce and Selina had a relationship, but what about Catwoman knowing that Bruce WAS Batman? Here’s the weird answer. Well, you see, Catwoman left Gotham City for a time and Bruce started dating Vickie Vale. In Batman #355 (by Gerry Conway, Don Newtwon and Alfredo Alcala), Catwoman freaks out and attacks Bruce and Vicki, driving their car off of the road and sending Vicki to the hospital.

Batman confronts Catwoman and she is VERY angry at him! However, during their first, Batman sure acts like Catwoman knows that he IS Bruce Wayne, right?

And when she almost actually KILLS Batman, she realizes that her anger and jealousy had gone too far and she confirms that she knows that Batman is Bruce Wayne…

The problem is that we never actually saw her LEARN that Batman was Bruce Wayne! She just sort of knew out of nowhere. It was confusing that the editors of the book even ran a note saying that they goofed and she DIDN’T know his secret identity, but then another story would have her know it again! So I think I’m still counting Batman #355 as the first time she learned his secret identity. It’s tricky, though, I’ll admit that.

After Crisis on Infinite Earths, they both lost their knowledge of their respective secret identities and Catwoman got her own series in the 1990s, so she and Batman had their own respective adventures while their paths crossed here and there, but things changed again in the famous “Hush” storyline by Jeph Loeb, Jim Lee and Scott Williams. In that story, the two really started taking each other seriously again and in Batman #610 (by Loeb, Lee and Williams), they started to date…

And in Batman #615 (by Loeb, Lee and Williams), they now know each other’s secret identities again!

And they’ve pretty much known each other’s identities since.

If anyone has a suggestion for a notable comic book first, drop me a line at brianc@cbr.com!

KEEP READING: When Did Spider-Man First Meet His Own Alternate Reality Variant at Marvel?

Marvel Teases a New Hulk – The Deadliest One Ever