You’ve heard of the Explorer’s Guide to Wildemount, that tome of knowledge for all things, well, Wildemount. But if you’re trapped behind the stuffy walls of Rexxentrum in the Dwendalian Empire, you might have found a few chapters missing from your copy. That’s all thanks to the benevolent King Bertrand Dwendal.

What you’d find in those missing pages are details on the wastes of Xhorhas, the next hottest tourist destination for the aspiring adventurer. If you want to see what splendors you’ve been missing, grab your moorbounder and come join me on a treacherous tour beyond the borders of the Dwendalian Empire!

Explore the wastes of Xhorhas in Critical Role: Call of the Netherdeep

Call of the Netherdeep is an upcoming adventure book that takes players everywhere from the wastes of Xhorhas to Marquet and the Netherdeep. Although we don’t yet know precisely where the adventure will take us in the wastes, it’s always handy to brush up on your geography!

Don’t let the name fool you: the wastes of Xhorhas are full of all manner of exciting locales and creatures—just don’t wander too far off the beaten path. 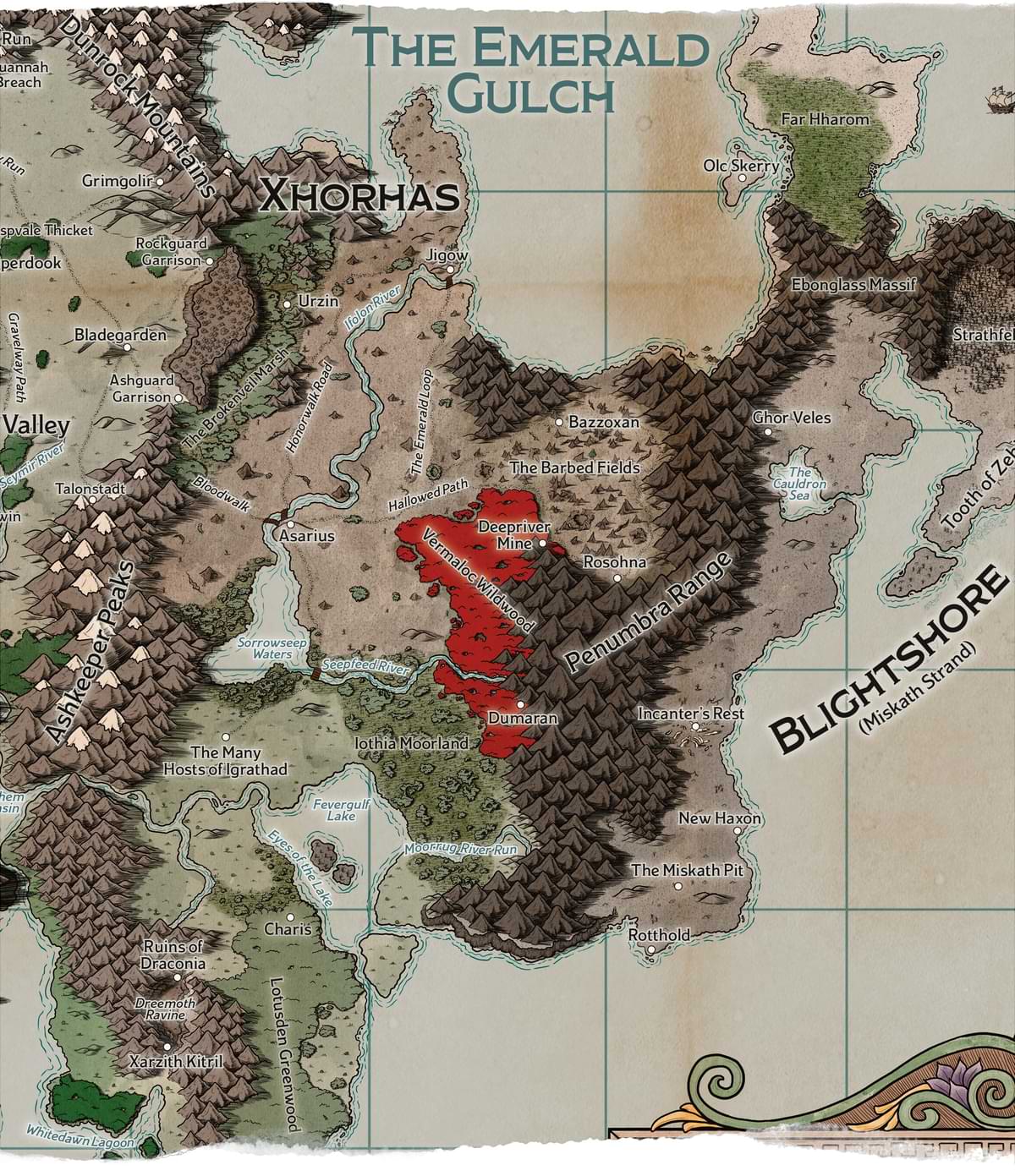 7 places to visit in the wastes of Xhorhas

Xhorhas might be a land scarred by the Calamity—but there’s an allure to its muddy wastelands that you just can’t find in the Zemni Fields. And hey, if you’ve visited the tropical Menagerie Coast and gotten a nasty sunburn, you’re going to love Rosohna!

Between you and me, I don’t think Xhorhasians are as bad as King Dwendel has led us to believe. Even still, Xhorhas isn’t quite as united as the Dwendalian Empire. While the Kryn Dynasty rules over the northern wastes of Xhorhas, they’re having a bit of trouble bringing some folks under their wing. That might have to do with the dynasty’s desire to convert folks to the Luxon, some obscure deity you’ve never heard of. That said, when you’re wandering about the wastes, maybe don’t wave your miniature Kryn Dynasty flag around. I know they come with the tour package, but we don’t want to cause any trouble.

1. Asarius, the City of Beasts 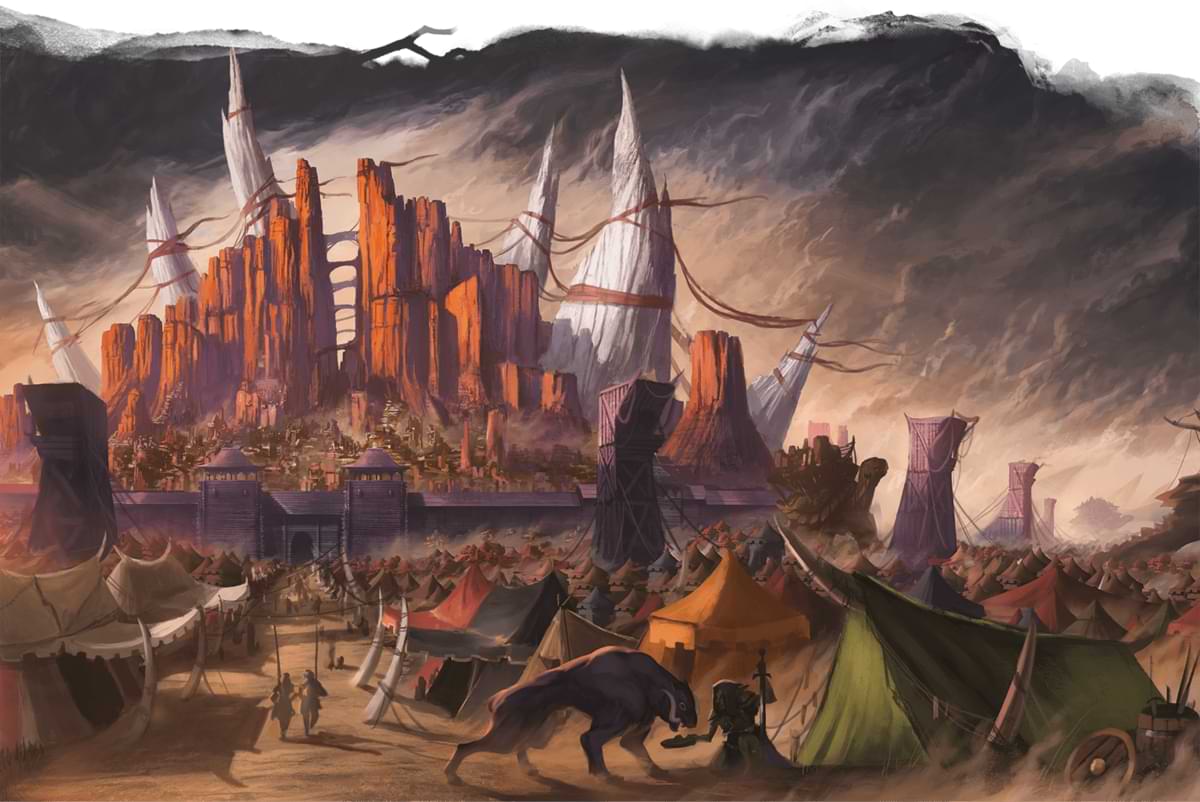 The first stop on our tour is Asarius, also known as the City of Beasts. It is built atop a muddy hill and is a cultural hub for wastefolks. Think of Asarius as an olive branch from the Kryn Dynasty—they provide resources and protection and you promise eternal devotion to the Luxon. That’s an exaggeration, but there are a great many Luxon temples around the city. We’ll make sure to pop into a couple. Rumor has it the Luxon has eternal life figured out!

I’ll admit, Asarius is rough around the edges. Sure, it’s brought together a great many people from across the wastes, but they generally prefer to hole up with their own. The flipside is that you’ll experience a variety of cultures from one neighborhood to the next. The downside is that you’re bound to get a bit bruised up—or killed—if you look the wrong way. But you can’t blame the wastefolks. Before Asarius, they all had to war with one another over the few resources in the wastes. There’s bound to be bad blood!

Now, if you were expecting a petting zoo in the City of Beasts, you might be disappointed. Asarius has a huge military presence. That calls for loads of war beasts and other beasts of burden. I can certainly ask around to see if you can pet a moorbounder, but I’d rather you keep your fingers!

Oh, that giant spire in the center of the city? That’s the home of none other than Den Olios. He’s kind of the leader of the city. You can thank him for the walls that keep us safe from the [Tooltip Not Found]. 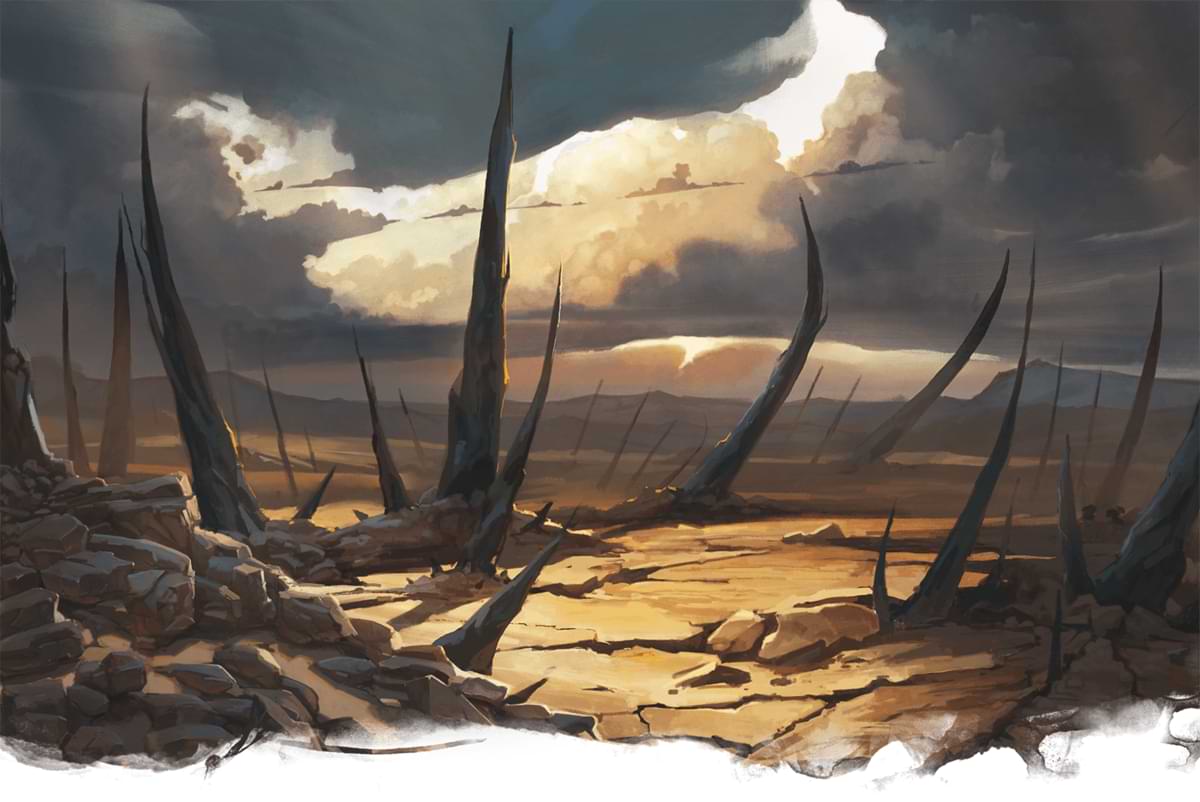 The Calamity was a monumentally tragic period for Wildemount. Both man and god stood up against the Betrayer Gods, and the ensuing war wreaked destruction around the world. It’s said that the Barbed Fields were home to the final battles of the Calamity—so it’s a natural pitstop on our tour of the wastes. I do kindly insist that you stay on the path through these spires. I haven’t quite worked out where all of the sinkholes are.

At the end of our tour of the Barbed Fields, you’ll find an abandoned excavation site where we can do a bit of digging. Who knows, you might find your very own Vestige of Divergence!

These mountains we’re riding along are known as the Ashkeeper Peaks. They’re home to the ruins of Draconia, a once glorious floating city-state of dragonborn that came crashing down after an assault by the Chroma Conclave just a couple of decades ago. The conclave was a sect of chromatic dragons that wanted to rule the world—or some other such thing. I hear some mighty adventurers helped put an end to them, but their name escapes me.

If you’re not much for caving, you’ll enjoy waterfalls and see griffons and other flying beasts in their natural habitat. Although we won’t have time on this tour, a long walk south through the Dreemoth Ravine will take you to Xarzith Kitril. Survivors of Draconia’s fall established the fine city, which is partly built into the ravine.

We’ll only be doing a passing journey through the Iothia Moorland. You’ll find hilly grasslands, lakes, and swamps throughout here. Why aren’t we staying long? Well, I’ve had some trouble with the roving clans in these parts. They don’t take kindly to outsiders. And did I mention the cyclopes?

This coastal town brings together goblins and orcs under the light of the Luxon—hey look, another temple!—and is home to some of the finest seafood you’ll taste on this side of Wildemount. Compared to Asarius, you’ll find Jigow to be far safer, though keep a close eye on your coin purse just the same.

Jigow is comprised of numerous fishing villages. Our first stop will be in the Meatwaters. It doesn’t sound nice, but that’s where you’ll get your fill of local delicacies. Afterward, we’ll wander over to the Jumble, where you’ll find homes built atop horizonback tortoises. No promises on getting to pet those, either. 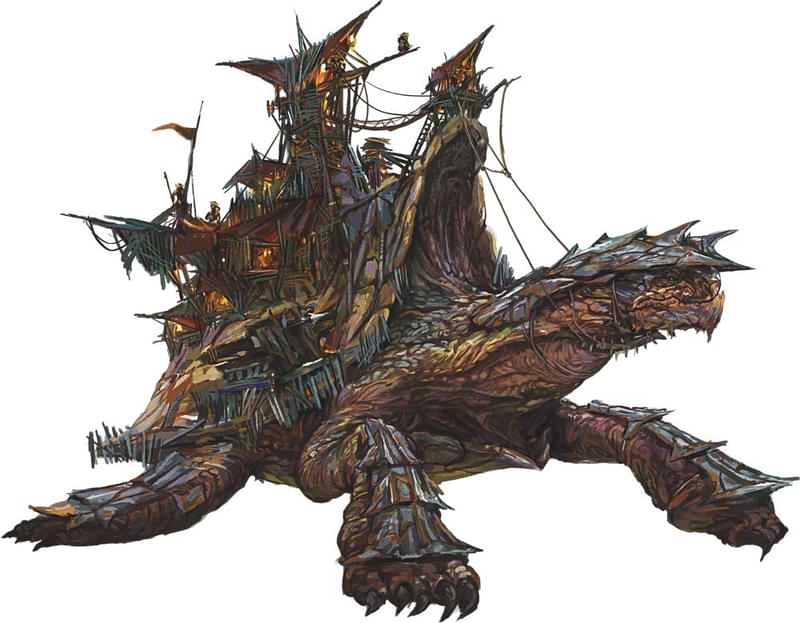 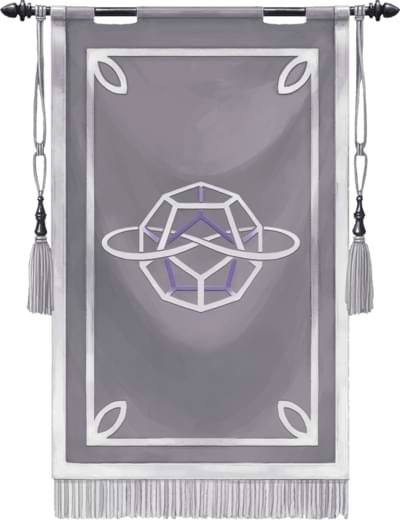 Our main stop on this tour is Rosohna, a city that rose from the ashes of the Betrayer Gods’ primary stronghold, Ghor Dranas. Bask in the splendor of crystalline cathedrals, glowing gardens, obsidian walls, and—is that a tree atop that house? How curious.

Despite what you might have been taught by the Dwendalian Empire, the dark elves here are generally welcoming of others. But they are still sensitive to sunlight—hence the magical shield over the city that blocks out the sun.

Admittedly, I don’t know much of the dynasty’s doings around Rosohna. It’s trouble enough getting into the city as a Dwendalian citizen. But I do know that 12 ruling dark elf Dens preside over the city. One Den stands above the others, and from it, we get the Bright Queen. At the center of the city, you’ll see the gray quartz of the Lucid Bastion—a cathedral to the Luxon—from where the Dens and the Bright Queen preside over citizens of the Kryn Dynasty. Fat chance we’ll get a ticket in, unfortunately.

I can take you to Gallimaufry, however. You’ll find all manner of Xhorhasian trinkets to take home. We can stop by the Shadowshire after. There, you’ll delight in seeing underground farms and edible bioluminescent fungi. Yum! 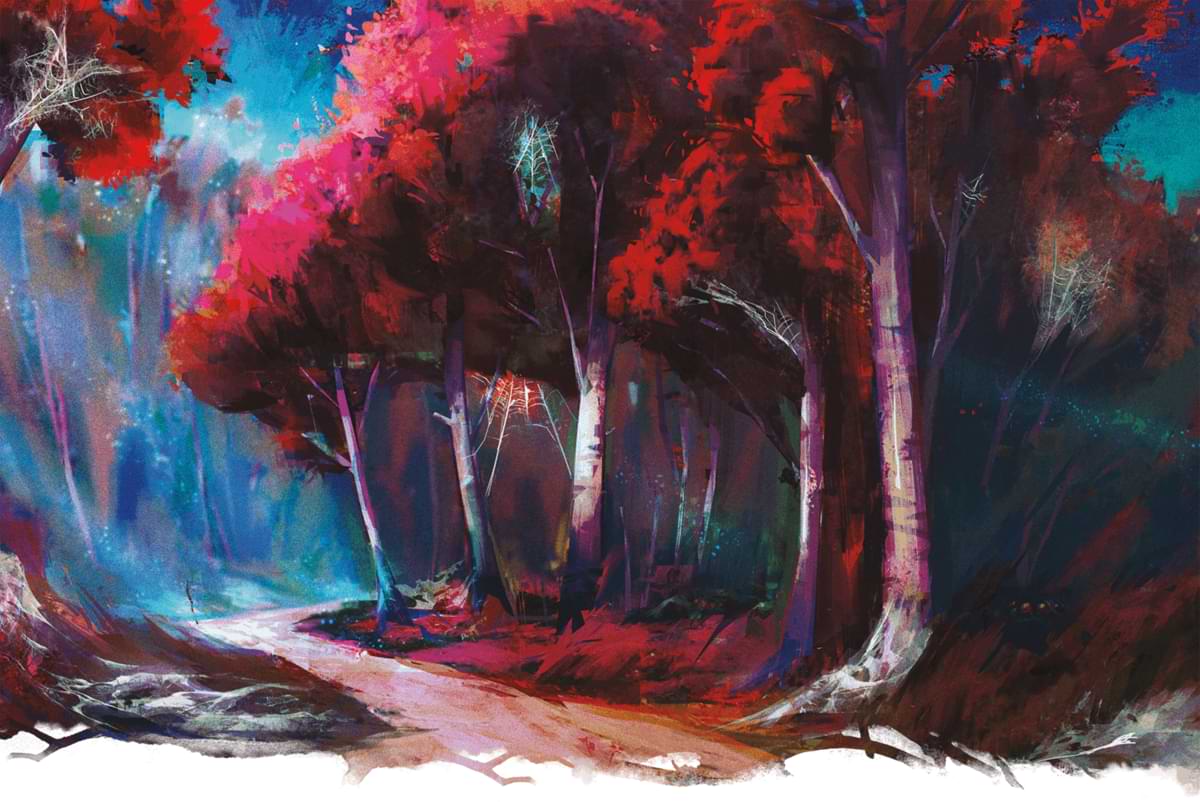 The Vermaloc Wildwood is as deadly as it is stunning. Bask upon maroon and purplish trees and leaves that appear trapped in eternal autumn.

Admittedly, the woods are a bit of a trap. Though they draw in folks from across the wastes—and it’s splendorous wandering through their camps—we can’t actually go into the Vermaloc Wildwood. The woods are the main source of logging for the wastes of Xhorhas, and there are ample monstrosities and giant spiders that hunt throughout them.

Journey deeper into the wastes of Xhorhas

The Explorer’s Guide to Wildemount details vast regions of Exandria and offers additional player options like subclasses. The upcoming Critical Role adventure Call of the Netherdeep builds on this book, taking players into the wastes of Xhorhas, Marquet, and the Netherdeep in an adventure running from 3rd to 12th level. We’ll keep you posted on details that come out on the adventure!