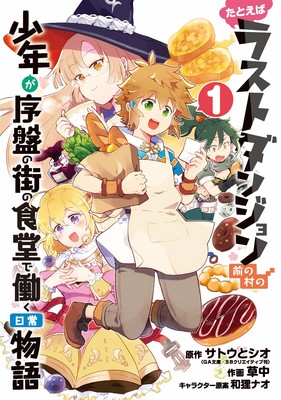 The February issue of Square Enix‘s Monthly Shonen Gangan magazine revealed on Wednesday that Souchu‘s Tatoeba Last Dungeon Mae no Mura no Shōnen ga Joban no Machi no Shokudō de Hataraku Nichijō Monogatari (Suppose a Kid From the Last Dungeon Boonies Worked at a Restaurant in a Starter Town) spinoff manga will end in the magazine’s next issue on February 12.

Yen Press is releasing the Suppose a Kid From the Last Dungeon Boonies Moved to a Starter Town novel series in English, and it describes the first novel volume:

Lloyd is a novice adventurer whose
dream is to discover “true strength” in the capital he’s always admired, despite growing
up with neighbors who always considered him weak. The story starts with him departing
his hometown, which just so happens to be located right next to…one of the most
dangerous dungeons in the world?! Lloyd may think of himself as powerless, but when
he goes to the city that serves as the starter town for adventurers, the difference
between him and everyone else couldn’t be starker!

The novels inspired a television anime adaptation that premiered in January 2021. Funimation streamed the anime as it aired in Japan.