A seamless mashup from artist Bruce McCorkindale pairs Pepe the King Prawn and Link Hogthrob in a pivotal scene from Star Trek II: The Wrath of Khan.

A spot-on fan art pairing of the Muppets Pepe the King Prawn as the villainous Khan and Link Hogthrob as heroic Captain Kirk recreates the dramatic and iconic scene from Star Trek II: The Wrath of Khan.

Artist Bruce McCorkindale has posted several Muppet movie mashups on Twitter, but this redux of the tense scene between two of the Star Trek franchise’s greatest rivals is practically perfect. In the mashup, Pepe sports the same feathered hair and open vest as Ricardo Montalban did in the 1982 film, while the next panel features a closeup of Hogthrob’s sweaty face while he shouts “PRAWN!” instead of “KHAN!” The final panel even has the same echo of Hogthrob/Kirk’s impassioned cry above a cratered world.

Pepe, or Pepino Rodrigo Serrano Gonzales, often asserts that he is not a shrimp but a king prawn, making his casting as Khan an easy one. The artist sneaks in Pepe’s own oft-used “Okay?” at the end of the word-for-word speech from the sci-fi film for some added hilarity. Pepe’s normally wild hairdo also fits nicely with Khan’s more subdued locks.

As for Hogthrob, he’s an even clearer fit as he premiered on The Muppet Show as captain of the Swinetrek spaceship for the Pigs in Space sketches. These recurring sketches were modeled after the original Star Trek television series as well as Lost in Space and other hit sci-fi shows from the ’60s and ’70s. Hogthrob’s overt machismo both in the sketches and during the backstage segments on The Muppet Show was at least partly inspired by Shatner’s own screen presence as Captain Kirk, where he was often fighting aliens or wooing them.

The scene chosen from Star Trek II is an intense and oft-parodied one. The genetically engineered superbeing Khan Noonien Singh (Montalban) has stolen a terraforming device called Genesis and trapped Captain James T. Kirk (William Shatner) and other crew members of the Starship Enterprise on a planetoid, planning to leave them for dead just as he was years ago. Khan delivers his ominous speech to Kirk over a communicator, incensing the captain and leading to an iconic Star Trek moment from Shatner.

The Star Trek mash-up is just one of many the artist posts to social media. In the past, McCorkindale did another Wrath of Khan tribute with Bert and Ernie as Spock and Kirk. More recently, there was a Master and Commander: The Far Side of the World with Kermit, Scooter and Gonzo. Even Dune director Denis Villeneuve’s 2013 thriller Prisoners got a treatment, featuring Gonzo and Camilla. 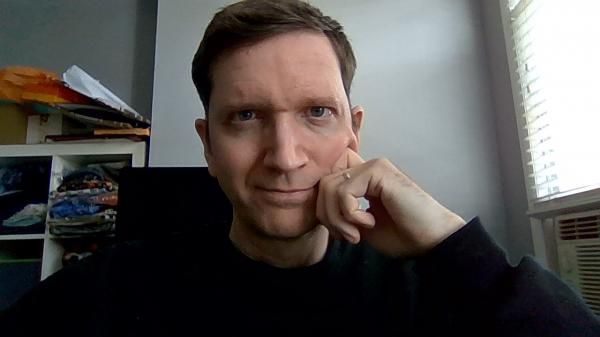