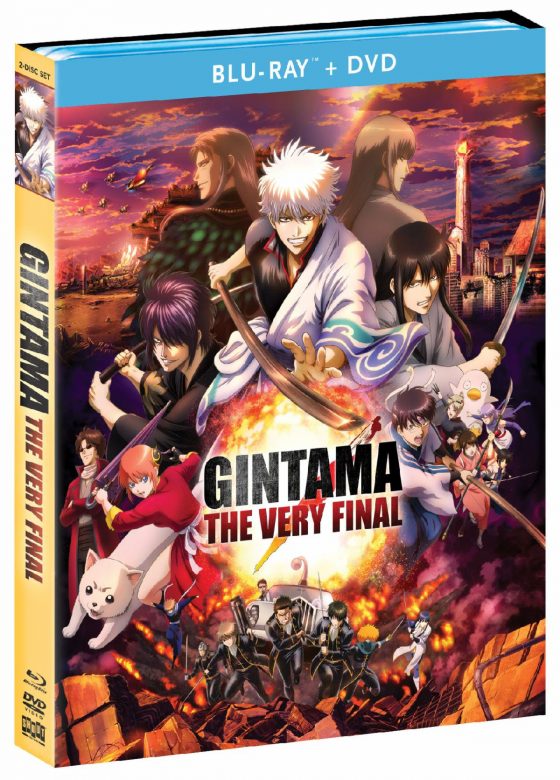 Third and Highly-Anticipated Final Chapter of Hideaki Sorachi’s Original Manga Series Now a New Film and on Blu-Ray™+ DVD February 8, 2022, Available to Own Digitally on January 25, 2022!

Everything I’ve wanted to protect is right here with me in spirit.

The countdown to destruction has begun! All will join to reclaim an Edo in grave peril!

The Earth is facing its darkest days, and the members of the Odd Jobs must come together to save it from this otherworldly menace. Old allies Gintoki, Takasugi, and Katsura strive their hardest for their own ideals, but standing in their way is someone with whom they share a sad history: Utsuro, an alternate personality of their former teacher and mentor Shoyo. Having been spawned by Altana, the energy that fuels all planets, this immortal fiend has regenerated multiple times until finally becoming Utsuro, the ultimate enemy… And he intends to take down the entire Earth in order to end his own life.

Gintoki and the others set out to fulfill the wishes of their teacher Shoyo and thwart Utsuro’s plans. Shinpachi, Kagura, the Shinsengumi, members of the Kabuki District, and even former enemies will join their fight. As Utsuro’s power grows, Takasugi fights for his very life. What does Gintoki, battered and bruised, see at the very end?

Will he be able to put an end to all this?!

Shout! Factory, LLC is a leading multi-platform media company devoted to film and TV distribution, development, and production, as well as the preservation and revitalization of the very best in pop-culture entertainment. Founded by Richard Foos, Bob Emmer, and Garson Foos in 2003, Shout! owns and manages a large portfolio of films, contemporary and classic TV series, animation, and documentaries. The company’s creative acquisition mandate has established it as a leading independent distributor, with partners and properties including GKIDS, Sesame Street, The Carol Burnett Show, The Johnny Carson Show, IFC Films, Stephen J. Cannell Productions, ITV Studios, Major League Baseball Productions, and many others. Shout! Factory Kids focuses on live-action and animated kids and family properties as well as anime, and the company releases films and television shows in other genres under the Scream Factory and Shout Select imprints. Shout! develops, acquires and distributes new films via Shout! Studios, owns and operates libraries including Mystery Science Theater 3000 (in partnership with creator Joel Hodgson) and the Roger Corman New Horizon Pictures Library, and operates the acclaimed streaming service Shout! Factory TV. Shout! Factory is based in Los Angeles, California. For more on Shout! Factory, visit shoutfactory.com.

It sure is! AND it’s coming in January! SO SOON!