WARNING: The following contains spoilers for DC’s Legends of Tomorrow Season 7, Episode 1, “The Bullet Blondes,” which aired Wednesday on The CW.

Following the Zaguron invasion, the Legends of Tomorrow were ready to head back into the time stream. However, a Waverider popped into 1925 and dropped a bomb onto the waiting ship before popping back out, leaving the team stranded in 1925 with no way home and no future tech. But they are never without hope, as the premiere of Season 7 sees the Legends of Tomorrow doing whatever they can to find a way home.

The day after the Zaguron invasion is busy for the sheriff’s department as Odessa’s residents come in to complain about all sorts of unexplained instances. On the other side of town, the Legends walk amongst the Waverider’s remains, unsure of what just happened. The only thing they know for sure is that they need to enact revenge on the rogue Waverider. They go back to Spooner’s house and arm themselves with everything they need to take on whatever evil is lurking in that ship. With the courier in hand, they take a stance and turn it on, only for the courier to run out of battery.

Taking the lead, co-captains and newlyweds Ava and Sara start to strategize, with Sara thinking of ways to get back and Ava reminding them of the dangers of leaving a huge footprint in the past. Before they can go further, a knock on the door interrupts them. Spooner answers it to meet Pastor Hanson, raising concern about the loud explosion he heard along with all the other strange occurrences. Spooner closes the door on the pastor and makes it back inside to a stressed Ava. The team lays out their worries, with Nate insisting that John Constantine would have been helpful in this situation. Astra butts in, reminding the team that she was his apprentice and while she is not a master, she has an idea. Gary reminisces about the old Time Bureau ships that came with a failsafe, which reminds Ava that when the Waverider was in Bureau hands, she installed a failsafe box with a courier inside. With a clear goal, the team heads off to search for the box.

RELATED: Stargirl Reveals a Villainous Link to The Flash & Legends of Tomorrow

Behrad tries to connect with her sister, comforting her over her breakup. Zari is annoyed at John for not only leaving her but giving her a mysterious key. The strong-willed Zari is not letting this breakup ruin her, as she sees it as an opportunity for a reinvention. Meanwhile, Ava is frustrated that she has to spend her honeymoon Waverider-less but her wife calms her down by assuring her that once they find the failsafe box, they’ll be back to normal. Spooner is finding it impossible to look for the box since her skills are more people and animal-based while Astra gets an idea. She conjures a tracking spell and follows it to the box’s location, learning that it has been moved.

They make it back to the team and inform them that the box is in the sheriff’s station and was dropped off by the pastor. This worries the team because it will draw more unwanted attention to Spooner’s mom, Gloria, and the timeline. While figuring out what to do, Ava remembers Rule 44 of the Time Bureau training: if things go sideways, create a cover story, specifically a circus. Nate thinks this means they need to put on a circus but Ava clarifies that they simply need to provide the story of a circus. This inspires Zari to use her other superpowers, fashion and design, to circus-ize the Legends while Spooner and Astra fix up the porch and Nate and Ava get the box back. With everyone’s roles in hand, the Legends make their way through the town, boasting about how all the strange things they saw were merely a circus act. All is well until a little girl asks Gary when the show is happening. Panicked, Gary tells her the show is tonight, forcing the Legends to get circus ready.

At the station, Nate and Ava take on the roles of J. Edgar Hoover and his assistant, hoping the sheriff will accept the lie and hand them the box. While he had his suspicions at first, Nate and Ava gleefully make it back with the box in hand only to learn of Gary’s mess. They push it aside as they now have access to a way home… or so they thought. Inside the box is an IOU from Mick and a Time Bureau handbook. As all hope is lost again, the sheriff starts catching on and learns that Nate is not Hoover. He makes a call into the Bureau of Investigations, informing them of the fraud. Shortly after, the real Hoover shows up at the station and assumes that Nate is a member of the Midland Gang, a group of bank robbers he has been chasing.

Back at Spooner’s, the Legends try to accept that they are marooned, with Astra showing frustration over the circus act going through, seeing it as useless. Sara assures her that they will deal with one problem at a time and rounds the Legends up to practice their acts but Astra shies away from them, heading to the back. Spooner grows concerned over the circus plan, as she is worried that Gloria might pay the price if their plan fails. In response, Sara instantly shuts down the circus, believing it will be for the best. At the back of the house, Astra stands among the rubble of the Waverider and casts a resurrection spell, hoping to fix the ship. Unfortunately, the spell takes a massive toll, which leads her to blackout before it is complete and causes the ship to explode once again. This explosion gets Hoover’s attention, who rushes over to Spooner’s in hopes of finding the “gang.”

Astra awakens in bed, weak and disheveled from the attempt to a disappointed Spooner by her side. Spooner berates Astra for bringing more attention to the house but Astra brushes it off, believing no one heard anything… until a knock on the main door interrupts her. The Legends learn of the real Hoover’s arrival and panic, choosing to hide in the room with Astra while Spooner and Gloria deal with the situation. Gary tries the closet door but finds it locked, which gets Behrad thinking that maybe John’s key can open it. With no other options, Zari uses the key and opens the door to find a brick hallway. Confused but having no time to waste, the team rushes inside just as Hoover enters the room to find only Astra, sick in bed. The team walk further into the hallway and find themselves in John’s mansion of all places. However, Gary reveals they are in a pocket dimension that John made for himself, outside of time and space and completely private. The key’s purpose angers Zari, as she is unsure why John would give her something like this. Through comforting words, Behrad lets his sister know that John loved her and probably wanted her to have a place away from the spotlight.

In the main world, Hoover leaves the house after not finding what he needs but decides to search the rest of the property. The team regroups and lays out their next steps just as Ava walks in with a great idea: head to New York City and meet with Dr. Gwynn Davies (Matt Ryan), a scientist who laid out the foundation for all of time travel. With Davies’s help, the team should make it back to 2021 but until then, they still have Hoover to deal with. Nate informs them that Hoover will not leave them alone until he gets what he wants, so Sara suggests that they actually become bank robbers and lead Hoover away from Gloria. This plan pushes Ava to her breaking point as she worries about all the things that can go wrong. Once again, her wife comforts her by telling her to make an IOU list of times so that when they’re able to travel again, they can go back and fix everything. Before they can leave, Hoover makes his way back to the door, which gives Sara an idea. Hoover rushes into the home to find Spooner and Gloria tied up, placing the blame on the gang and giving the Legends time to escape.

RELATED: Legends of Tomorrow’s Finale Carries on an Arrowverse Tradition

The Legends roll up to a bank, with Sara and Ava handling the robbing, Nate and Behrad dealing with crowd control outside and Gary stuck as the getaway driver. Sara and Ava masterfully steal the guns from the bank patrons and hold them up, demanding $93.65, the exact amount they need to get to New York. Outside, a woman tries entering the bank but is stopped by Nate who attempts to shoo her away, but she catches on that this is a robbery and gets curious. Nate reveals they are the Midland Gang, which excites the woman, as she admires them. But upon looking inside and seeing two blonde women, she becomes skeptical because she knows the Midland Gang is all men. This forces them to come up with a new name: the Bullet Blondes.

With that, the Bullet Blondes mosey on down the road, proud of their winnings. They are greeted by a roadblock set up by Hoover, demanding that they step out. Sara gets Nate to take the wheel and gun it forward, steeling up to avoid getting shot. They make it past the roadblock only to find Hoover riding on top of the car. Nate makes a forced stop, sending Hoover flying through the air and onto the ground. The Legends get out, believing they’ve killed him only to discover him alive and well and pointing a gun at Nate. With no time to think, Nate steels up, sending Hoover’s bullet back into his own head, killing him. As the team starts to panic, Ava uses her knowledge of murder podcasts to think of her next steps, starting with getting rid of the body. Luckily, they have human-eating alien Gary to help with that.

On Spooner’s farm, Astra has recovered and is helping with the gardening until Gloria comes up and helps Astra deal with her failure. Astra feels like she let John down because she cannot do magic as he does. Gloria tells Astra to do magic her own way and find her own strength. Astra apologizes to Spooner over how she acted, letting her know that she wanted to prove herself worthy of replacing John. Spooner relays her mother’s sentiments, telling Astra that they don’t need another John, they need Astra as she is. She even calls Astra her best friend, something Astra has never heard before. The pair sit on a piece of the Waverider and wish Gideon could be there to help. A string of energy leaves Astra and forms into a being: Gideon, in her human form.

Legends of Tomorrow Season 7 airs Wednesday nights on The CW.

KEEP READING: Why Legends of Tomorrow’s Second Season Is Still the Best 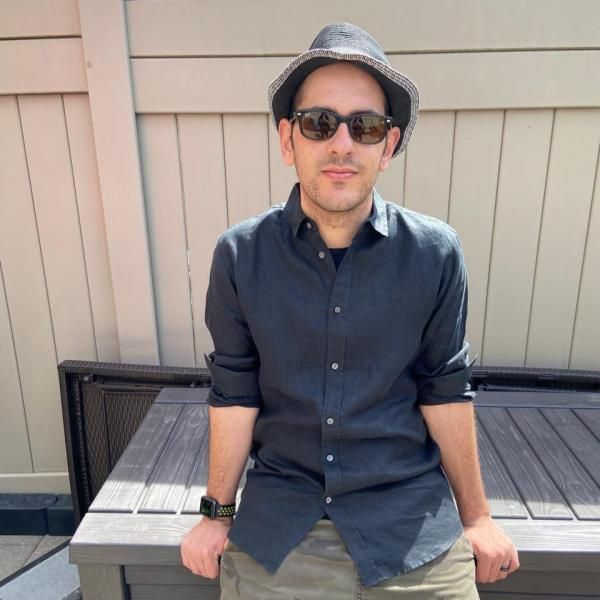 Zeid Abughazaleh is a late bloomer when it comes to comics as he did not get entranced into the world until the release of Iron Man in 2008. After which he was skyrocketed deep into the delves of comic-based entertainment, having an interest in the Marvel Cinematic Universe, the Arrowverse, and the DC Animated Movies Universe. In his free time he loves to write scripts for short films, plays, and sitcoms. Online Handle: @jordanianrage (Twitter)