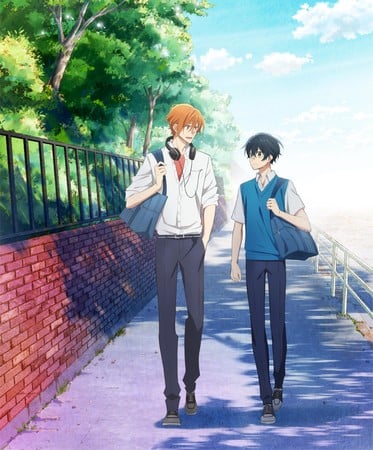 The official website for the television anime of Shō Harusono‘s Sasaki and Miyano manga revealed on Friday that the anime will premiere on Tokyo MX, KBS Kyoto, and Sun TV on January 9, on BS NTV on January 10, and on AT-X on January 11. It will also begin streaming on U-NEXT on January 9.

The five-member band Miracle Chimpanzee is performing the opening theme song “Mabataki” (Blink) is the band’s first single on a major label, while Yusuke Shirai and Sōma Saitō are performing the ending character theme song “Ichigo Sunset” (Strawberry Sunset) as their respective characters.

Yen Press licensed the manga, and it describes the story:

It all started like a typical old-school boys’ love plotline—bad-boy senior meets adorably awkward underclassman, one of them falls in love, and so on and so forth. But although Miyano is a self-proclaimed boys’ love expert, he hasn’t quite realized…he’s in one himself. Which means it’s up to Sasaki to make sure their story has a happily ever after…!