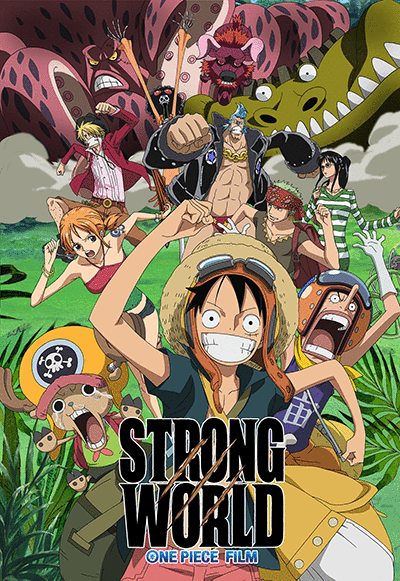 There’s gonna be a rumble in the jungle in “One Piece Film: Strong World” – an original One Piece movie written by creator Eiichiro Oda! When the Straw Hats catch wind of trouble in the peaceful waters of the East Blue, they quickly set a course for home! But before they reach their destination, fate leads them into the deadly path of Golden Lion Shiki. This gravity-defying madman needs a navigator, and he wants Nami! Shiki scatters the Straw Hats across the far corners of a floating island filled with ferocious, genetically-mutated monsters, and issues Nami and ultimatum: join his crew – or her friends die! BIG mistake. Luffy kicks his attack mode into Third Gear and begins a brutal rampage across the beast-ridden island. It’s all hands on deck – including a new character – for this watershed adventure in the One Piece canon. Monkey vs. Lion. Winner gets the navigator!

Based in Los Angeles, Toei Animation Inc. manages the film and TV series distribution of Toei Animation’s top properties – some of the world’s biggest anime franchises including Dragon Ball, Sailor Moon, One Piece, Digimon, Saint Seiya, and many others – to North America, Latin America, South Africa, Australia, and New Zealand. In addition, within these territories, Toei Animation Inc. handles all categories of consumer product licensing based on Toei Animation’s film and television brands. For more information, please visit toei-animation-usa.com.

This is going to be one huge celebration!