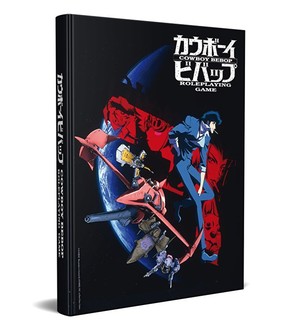 Cowboy Bebop, the Role-Playing Game, an upcoming tabletop role-playing game based on the Cowboy Bebop anime, has been announced and a Kickstarter campaign for the game will be launched in 2022. The tabletop game will be developed by Don’t Panic Games and Mana Project Studio in collaboration with Sunrise, and is projected to release at the end of 2022.

According to a press release announcing the game, Cowboy Bebop, the Role-Playing Game will allow players to “live through their own stories of bounty hunters in space, in a jazzy universe blending Western, Film Noir, and buddy cop movies, accompanied by one of the best anime soundtracks in history.”

Cedric Littardi, the founder of Don’t Panic Games, commented “As a pioneer of Japanese animation in Europe and an early role-player, I have always dreamed of living adventures in the universes of famous anime. We are overjoyed that Sunrise, with whom we have worked for many years, has entrusted us with making this first experience possible.”

Don’t Panic Games is a board game development team based in Paris that is known for its anime and manga-inspired line-up, which includes Cowboy Bebop: Space Serenade, Attack on Titan: The Last Stand, and Naruto Ninja Arena.

“Cowboy Bebop is part of those anime that made up our cultural background. As fans of the anime, we are thrilled to be able to work on this project, a unique opportunity to design on both the themes of CBB and its strong visual identity” added Michele Paroli, founder and lead designer of Mana Project Studio. Mana Project Studio is the Italian creative studio behind Kickstarter-backed TTRPGs such as Journey To Ragnarok, Historia, and Nightfell.

Cowboy Bebop, the Role-Playing Game will be designed by Italian authors Fumble, whose TTRPG Not The End won the prestigious Italian Game of the Year award in 2020.

For those attending this year’s Essen SPIEL game fair, an exclusive leaflet presentation will be available at the Don’t Panic Games booth 2D116.

The Cowboy Bebop anime series is inspiring a live-action series starring John Cho slated to premiere on Netflix on November 19.

Disclaimer: Cedric Littardi, the founder of Don’t Panic Games, is a shareholder in AM Media, the publisher of AnimeLand and other magazines. Anime News Network is also a shareholder of AM Media.

10 Horror Movie Franchises That Bounced Back After A Terrible Entry