While Jimmy Woo has only appeared in two MCU properties to date, he has become a hilarious fan-favorite, mostly because of his goofy demeanor in Ant-Man and the Wasp. While he was still funny in WandaVision, fans got to see a lot more of Agent Woo resulting in more character development rather than more one-liners.

While Woo is based out of San Francisco, he has no trouble making it across the country when the job calls for it, so he has the potential to appear in various upcoming MCU films and series. While the Ant-Man threequel is gearing up to be a wild ride in the Quantum Realm with Kang the Conqueror, fans are certainly hoping to see Agent Woo once more delivering some great comic relief and better magic tricks.

When Scott accidentally smashes his foot through his backyard fence, the ankle monitor ends up on the outside of the perimeter prompting the FBI to stop by for a quick visit and full inspection of the premises. Despite the honest mistake, the FBI tears apart Scott’s house in search of evidence to lock him up.

Lang tries to plead with Woo, but he tells him that if the monitor gets tripped, “we search the place. Keel to stern, soup to nuts,” which isn’t one of Woo’s funnier quotes but it explains the type of person Woo is. Jimmy Woo is very by the book (usually) and this quote exemplifies the trait.

9 “Well, Your Daddy Went To Germany And Drew On The Walls With Captain America.”

In an attempt to explain to Cassie how Scott broke the law, Agent Jimmy Woo uses a comparison between rules of the real world with school rules, hoping Cassie will understand. After using “drawing on the walls” as an example of breaking the law, Woo tells Cassie, “Well, your Daddy went to Germany and drew on the walls with Captain America,” which is hilarious oversimplification of the Leipzig-Halle Airport incident.

Woo continues the explanation with, “…and that was a violation of Article 16, Paragraph Three of the Sokovia Accords…”. He concludes his seemingly child-friendly explanation by laying out the rules of Scott’s house arrest and his probationary period of avoiding unauthorized technology or other Accords breakers. Scott sarcastically notes that Woo is great with kids and without skipping a beat, Woo responds with, “Thanks, I’m also a youth pastor,” which confuses Scott and provides fans with another laugh.

Woo and the FBI storm Scott’s house shortly after seeing Giant-Man on TV. Cassie tries to stall for Scott by saying her daddy is sick and she argues with Woo while blocking the stairs.

In an attempt to flex his authority, Woo tells her, “Young lady, I’m a federal agent. I’ve seen worse things than vomit” which seems legitimate until he follows up with, “…like, “a lot” a lot?” This slight pivot changes the tone of the interaction and gives fans another laugh before Woo races up the stairs.

7 “Damn It, Scotty, Reduce Yourself!”

When Woo rolls up on a giant Ant-Man suit, he believes that he has finally caught Scott red-handed with Pym-tech. He talks to the suit sayings things like, “It’s over, Scotty,” and “I’m sorry, but we got you, man,” while unbeknownst to Woo, Scott was sneaking away down the alley side of the building.

Eventually, after no response from the suit, Agent Woo exclaims, “Damn it, Scotty, reduce yourself!” which is not only a funny thing to say to someone, but Randall Park’s delivery of the line is equally fantastic. In response to Woo, the suit begins to deflate with no one in it, prompting Woo and the FBI to head for the Lang residence.

6 “Did You Want To Grab Dinner, Or Something? I Mean, Because I’m Free…”

Once Scott has finally completed his two-years of house arrest, he and Agent Woo have a pretty hilarious back and forth involving potential future plans. Woo tells Scott he’ll see him around to which Scott replies, where will he see him around? This confuses Jimmy and he awkwardly explains that he will be there to arrest Scott the next time he breaks the law.

Clearly messing with Woo, Scott tells him he thought he was inviting him out somewhere, assuming Woo had an evening planned. Woo turns to leave but quickly turns back to Scott to ask him about dinner or something. Scott quickly declines and they part ways, ending the hilarious sequence.

When Jimmy first meets Monica Rambeau, he introduces himself and pulls his business card out of thin air. This is a great callback to Ant-Man and the Wasp when Scott shows Jimmy the card tricks he’d been learning which inspired Jimmy to take the same online magic course and learn a few things beyond card tricks.

Another hint to Woo’s magic course comes in the series finale of WandaVision when Woo is apprehended by Hayward. After stealing a cell phone, Woo uses a safety pin to break out of a pair of handcuffs, noting his success with, “Oh. ‘Flourish’,” before calling his FBI buddies for backup.

After sending Agent Franklin into the sewer system below Westview, Woo tells Hayward how much he doesn’t like the plan and that there may have been several variables overlooked. Hayward sarcastically says that he bets someone at Quantico probably really misses Agent Woo.

Jimmy sincerely responds with, “No, sir. Softball season’s over, sir,” which is hilariously in character for Woo. Not only does he maintain professionalism with the “sirs” but he also genuinely believes that people love him for his softball skills, which is adorable and suggests that he must actually have some softball skills.

When Woo and Dr. Lewis are watching Wanda’s broadcast of the happenings within Westview, he asks Darcy, “So you’re saying the universe created a sitcom starring two Avengers?” which is an interesting initial thought. The universe manifesting the sitcom could be foreshadowing Hulk’s Snap manifesting the Emergence in Eternals.

Continuing on with the universe theme, Woo then asks Darcy, “All right. Brass tacks, Dr. Lewis. What are we lookin’ at here? Is it an Alternate Reality? Time Travel? Some Cockamamie Social Experiment?” which is interesting. While some cockamamie social experiment is unlikely to appear in the MCU, fans have already seen plenty of time travel in Endgame and Loki, and alternate realities/timelines courtesy of What If…? and Loki.

2 “Heck, I Thought About It For Sure. A Little Jimmy Woo. Get Him A Tiny FBI Badge. Oh, You…Chip? Sure.”

Another great line comes from when Darcy and Jimmy are watching the broadcast together. Woo notes that Wanda and Vision are having a baby, and immediately following that sentiment, Darcy asks Jimmy if he wants one.

Jimmy chuckles to himself and says, “Heck, I thought about it for sure. A little Jimmy Woo. Get him a tiny FBI badge,” and as he is saying this Darcy moves the bag of chips closer. He looks over and says, “Oh, you…chip? Sure,” before grabbing a chip and quickly going back to watching the broadcast.

When Woo, Monica, and Darcy are discussing Wanda’s potential power level, Monica mentions that Wanda almost handled Thanos by herself and that no one else came close. Woo quickly responds, “Well, I’d argue that Captain Marvel came close,” which prompts Darcy to ask about her powers.

Monica quickly, and awkwardly changes the subject, suggesting that they “aren’t talking about ‘her’ right now,” as she turns her attention to the whiteboard. Many fans speculate that this thread started by Agent Woo will be heavily pulled on in The Marvels, hopefully shedding some light on the presumed fallout between Captain Marvel and Lieutenant Trouble.

NEXT: 10 Things We Noticed In The Latest Eternals Trailer 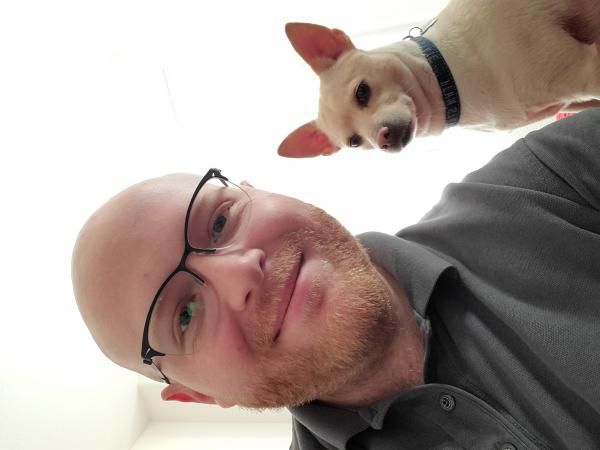 Julian Prestia is an avid MCU enthusiast, researcher, and overall hardcore fan. He has also been a die-hard fan of Avatar: The Last Airbender since its premiere in 2005.

Julian graduated from the Pennsylvania State University in 2013 with a BS in Wood Products. He continued his education at UNLV where he earned a Graduate Certificate in Solar and Renewable Energy in 2016 as well as an MS in Construction Management in 2018.

Despite his background, Julian is passionate about writing and has been developing music, movies, and various stories for over a decade. When he isn’t watching Penn State football or spending time with his beloved dog, Shabadoo, you can typically find him re-watching an MCU movie/show or doing research on one.

The best Back 4 Blood Doc build