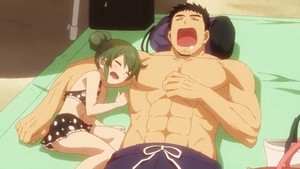 A beach episode filled with nothing but pure unadulterated social teasing from the whole cast towards each other about their obviously growing relationships? Sign me up!

This episode brings most of our established characters to a much more relaxing setting—or at least that’s what it’s supposed to be. However, it’s a nice change of pace to see the two main couples get to spend time with each other in an arguably more publicity intimate setting, even if these types of episodes are a cliché in and of themselves. Yes, there is plenty of fanservice from our larger female cast, but I was a little disappointed that the episode didn’t draw enough attention to just how freaking built Takeda is. I mean, we know he pretty much works out as a default whenever he’s bored or has nothing else to do, but the series just kind of casually draws him shredded without his shirt on and it would’ve been nice for a little bit of equality there. I don’t know about you, but I certainly would’ve appreciated it, especially since a running gag in the series revolves around Kazama being so enamored with breasts and some of the best banter between him and Sakurai does revolve around those moments where he can’t help but stare at her. This does get challenged a little bit with the introduction of Futaba’s best friend who finally gets to meet her work friends properly, but it still leads to some funny moments where Sakurai clearly just wants Kazama to stare only at her. (I know you’re trying to get through to him but trust me, you’re gonna have to be even more direct than that!)

On the topic of breasts (yes I am going there), it is a little bit interesting that the series actually kind of had Takeda admit that he does have a preference towards women of a certain body type that is different from Futaba, which obviously made her jealous without him realizing it. I guess he doesn’t really participate in the sexual harass- I mean banter that some of the side characters engage in, but it’s still surprising how casually he responds to the question, whereas most other anime tend to paint this type of character as having almost no sex drive at all. But then he basically admits that he likes other parts about Futaba more. This guy doesn’t have a lot of self-awareness with regards to what he is saying or the impact that it has on people around him. He is basically immune to teasing, and all attempts to pry into him have basically backfired. While hilarious, it does make me hope that at least one thing causes his armor to crack a little bit in these last couple of episodes.

Finally, we get some good moments with Yuto and Kurobe developing more of that rapport that we had seen in previous episodes. I don’t know why I thought the series was pushing a sort of one-sided crush (there have been a lot of shots of them just sort of staring at each other) but I’m glad the show has sort of sidestepped that and made it clear that they look at each other for more self-reflective reasons. Yuto looks up to Kurobe because she is this cool adult who gives the impression that she’s got everything figured out and even asks her for relationship advice. Meanwhile, she looks towards Yuto with what I can best surmise as a sense of nostalgia. She very much reminds her of how she used to be so she’s happy being that adult anchor for him so that he doesn’t experience the same type of lethargy that she did when she was his age. But of course there’s still a lot of teasing thrown in there for good measure and it’s all adorable. Everyone in this episode is adorable and I just want to keep seeing these relationships grow.

My Senpai Is Annoying is currently streaming on
Funimation.