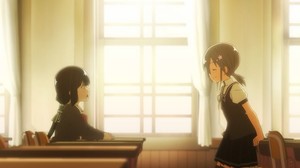 There are some parts that feel only a little ironic in this episode of Yuki Yuna is a Hero: The Great Mankai Chapter. Right at the beginning of it, the erstwhile Sentinels we’ve been following remark on the undone progress of chopping down the previously planted sacred tree saplings. They question if doing so only puts them right back where they started, which fits perfectly into the outside story structure of this between-season chapter and its need to foist the series’ trademark trials and tribulations onto a new crew of tragically adorable heroines. And it then turns out to be even more apropos as we see where this episode ends up. Yuki Yuna has always had one foot planted in metatextual storytelling, an element which crops up more as this week’s entry goes on, but by this point it has me wondering if the series’ own awareness of its cycles of sacrifices, denial, and perseverance wouldn’t behoove it to firmly break out and try something new before the end of this.

That’s all some preliminary griping about the general structure of this season it’s still forcing me to wonder about, though. In a differently ironic sense, that’s borne out of how much I liked a lot of what this episode does, at least in its first half. I was only just introduced to Mebuki and the rest of her ESIF crew a couple episodes ago, but this one really crystallized for me how much I’d come to appreciate their bonds and the show’s way of illustrating it. These are characters who have a tragically crystallized understanding that they are not the capital-H Heroes of their world, with no love lost for the organization or God itself that has pressed them into that position. It puts them on the same level as the audience who by this point may be weary of the showrunners using the characters mostly to mine tragedy. Seeing Mebuki rail against the assignment of securing the sapling to instead ensure her team comes back alive at any cost, as she textually declares that she’s had enough of the ‘sacrifices’ that drive the narrative, is a satisfying climax for her character to reach.

It’s key that Mebuki has pulled off so satisfying a character arc in this short a time, especially with how she started. Oh sure, I found her compelling enough back in the second episode when she was struggling with self-imposed inferiority over not being selected as a Hero. But now we’ve seen her reach a point where she isn’t even focused on that accomplishment anymore, and instead simply giving her all for the right of herself and her cohorts to exist uncompromised. Seeing the systems and situations that led her to that makes it feel earned. Most importantly, it fits the storytelling arc of a character like Mebuki “learning a lesson”, but not totally through humbling tragedy or the expectations from the Taisha and Shinju she shouldered; rather, Mebuki has arrived where she is now through her own experiences and understanding of her new friends and the system that would disregard them. She convinced herself of her new position, and brought us along in agreement with it, and did so with a pretty spiffy battle against nightmarish space monsters. Everyone involved can call that a win.

So it makes it just a bit jarring when the episode pulls back after that to indicate that the entire segment with the Sentinels was, for now, merely intended as an interlude before we got back to the Sanshu Junior High Hero Club. It’s another case of that oddly-articulated irony to find out that the story of Mebuki and her team fighting back against being tragic story sacrifices was itself actually being delivered as a sob story by Aki to convince Togo to go along with the sacrifice we already know she goes along with. And while I appreciate the effort behind that otherwise awkward attempt to transition between those two plotlines, it does feel like, in trying to jump those tracks, this episode may have instead simply gone off the rails. Just to begin with we’ve got the further irony of the episode-opening “Right back where we started” rumination intersecting with this story showing a thing we already know happened at the beginning of the Hero Chapter. But more importantly, the expansions we get on the circumstances and characterization of Togo through it simply don’t feel like compelling enough additions to warrant the time spent going back to it.

The most glaring point arrives in the form of more of that aforementioned metatext. Basically, the writing now seems extremely aware of how hard it has been (and continues to be) for audience members to be wholly sold on ‘forgiving’ Togo for her actions at the end of the original Yuki Yuna season. So the majority of the narration and internal dialogue of this section is dedicated to trying to assure us that, no really you guys, Togo felt super bad about that whole ‘trying to destroy the world’ thing, and she willingly went full martyr mode because she was still stressing over it, and even noted that Yuna forgiving her was something no one else could possibly do. The thing is though, regardless of whether you feel that forgiveness of Togo is warranted or not, deploying these kinds of direct appeals to convince the audience isn’t really going to have an effect because anyone watching can see it for what it is. It’s on the same level as that early-episode acknowledgement of the overall story’s undone progression now exacerbated by all this timeline-jumping slotting of stories into the show’s extra margins: It’s not as clever as they think it is, and it just makes what had previously been a series enjoyably confident in its ambitions and theming come off more uncertain, like they’re turning a big dial that says “Meta” on it and constantly looking back at the audience for approval.

All that said, I won’t deny that I was pleased to see them bring Gin back for a guest spot as we rounded Togo’s internal struggles up to her retrieval in the second episode of Hero Chapter. The entire purpose of Gin’s character in the first half of the second season was to convince us that she was basically the coolest person ever, and it definitely worked on me. There’s some sweet sentimentality in how she appears here (in fact, gripes about content aside, this whole Togo stretch of the episode has some lovely presentation for its somber, reflective content), and plays into the inherent reverence of her character that her ghost is able to talk Togo down even as she’s at her most “poor me” stage. It makes for a clean ending for a part of the episode that otherwise felt like a stumbling block, even with yet another ironic meta-deployment of an observation that quick fixes to larger overall issues never last. It all just leaves me with the same trepidatious question I’ve had since this season started: Okay, so now what?

Yuki Yuna is a Hero: The Great Mankai Chapter is currently streaming on
HIDIVE.


Chris is a freelance writer who appreciates anime, action figures, and additional ancillary artistry. He can be found staying up way too late posting screencaps on his Twitter.