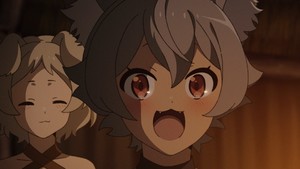 With a title like “Slow Life in the Doldia Village,” one would expect a breather episode, but this episode accomplished a lot more than just a quiet interlude: Eris’s friendship with a beast girl is the focal point of the episode, while Ghislaine gets an entire character arc without even being present. Despite Rudeus taking a backseat as the main character for once, those subplots end up eloquently tying back to the core theme of the series: “It’s never too late to change.”

The revelation that Ghislaine had a troubled past is genuinely impactful because of the limitations of Rudeus’s perspective thus far. Ghislaine was presented as a calm and competent adult, yet always quietly affable past her intimidating exterior. It’s notable that her introduction took place almost immediately after the subplot around Paul’s adultery. In his mind, Rudeus had firmly rejected Paul as an adult figure to take inspiration from, but Ghislaine never showed such an obvious flaw. Nevertheless, unlike Eris, Rudeus doesn’t react to Gyes’s anger about Ghislaine with rejection or denial. That’s because he knows from both his previous life and this one that adults don’t always have it together. He never knew this side of Ghislaine, but what he learns does not surprise him, nor does it lessen his respect for who she is now.

Eris’s subplot with the beast girl Tona is also significant because it’s a story about making amends. Eris’s physical growth as a swordswoman has been a consistent theme throughout the past few episodes, but her faltering steps towards emotional maturity are just as important to her character arc. She’s notably never had a female friend her own age before, and the fact that Tona is drastically weaker than her also requires her to tap into her gentler side. When they fought over their eventual parting, the most important thing is that they were able to honestly talk things through by the end. It’s a resolution that’s gently encouraged by Gyes and Rudeus, who have their own regrets about not being able to make amends with the people they hurt before it was too late.

As for the visuals this time around, it’s interesting that the episode takes place during the rainy season. In the language of visual storytelling, rain indicates somberness—even when this episode opens with a comedic scene of Rudeus attempting to peep on the girls, the muted colors immediately indicate a contemplative tone that’s consistent with how the previous episode ended. The skies eventually do clear up, signaling a resolution to the interpersonal conflicts established in the episode, but a note of dramatic irony lingers at the end. Rudeus and the others still don’t know what happened to Sauros, and Rudeus is obviously asking for trouble down the line when he ends the episode with the thought: “I hope we never come across anyone stronger than Ruijerd.”

Ed Brubaker Explains Why He Turned Down Substack’s Comics Offer

Fully-On-Chain Version of the 100 Limited ‘Original Otaku Coin’ NFT Will Be Distributed On Ethereum!

What Was Cowboy Bebop Really About?