If you’re going to flush a goldfish down the toilet, make sure it’s actually dead, folks. Battle for Beyond Dungeon Master Jasmine Bhullar shows us what happens when you betray a fishy friend and they form a symbiotic bond with a bloodthirsty monster known as Seataur. If that description doesn’t quite make sense, then it’s time you caught up on the chaotic six-part D&D mini-series on our YouTube channel.

Here’s everything you need to know about Polodio. Beware spoilers for Battle for Beyond. 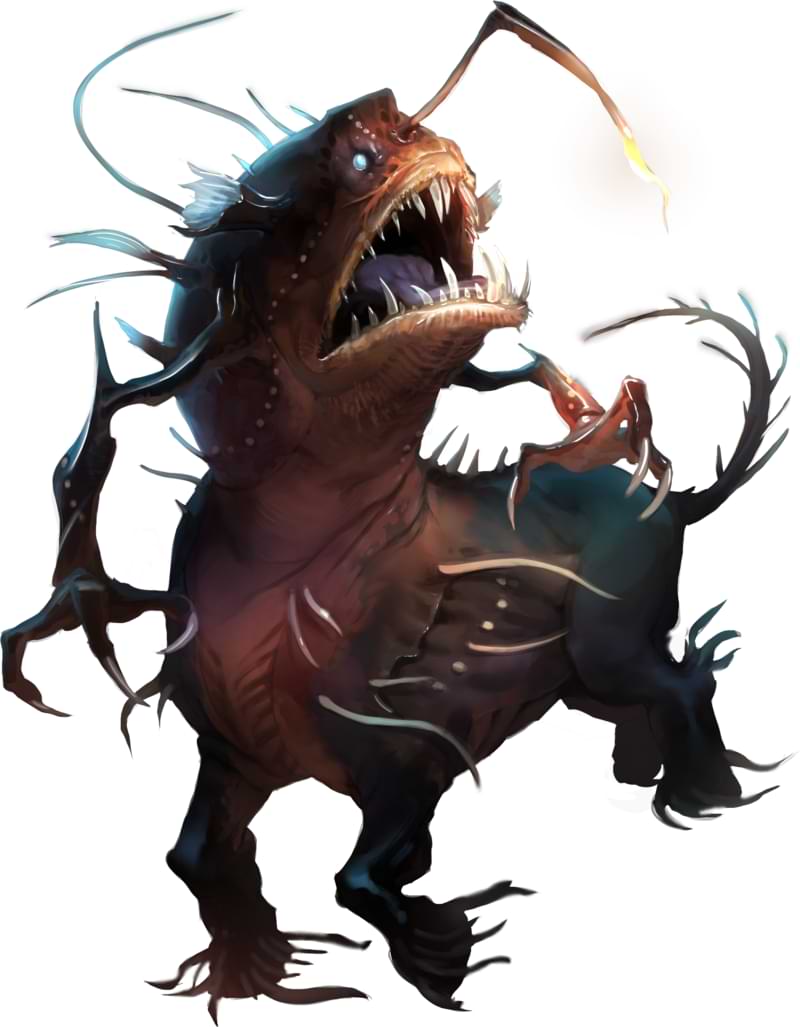 In Battle for Beyond, Polodio is the pet fish of Kyshaar, a half-orc porter. The doomed creature was left in the care of the tiefling Nikhil, whose thoughtlessness led to the fish’s (presumed) death and a trip down the toilet and into the sewers beneath RajMedan.

When we meet Polodio in the penultimate episode of Battle for Beyond, we discover that he has formed a symbiotic bond with a mysterious monster humorously known as Seataur. The nickname is owed to the fact that it looks, well, like that.

Little is known about Seataur, though residents of RajMedan have their theories.

One is that Seataur was a former contestant that was sucked into a whirlpool in the fighting arena. Others simply see Seataur as nothing more than a tall tale. But no matter the truth behind this fishy nightmare, it has a thirst for blood — and unique methods for getting a taste.

Have you met The Line?

Battle for Beyond introduces all manner of homebrew monsters, including The Line, a flamethrower-wielding, trapsetting man without a face! Click here to learn about The Line and see his statistics.

Polodio the fish returns from the dead with an arsenal of abilities thanks to its symbiotic relationship with Seataur. Conjure a water elemental, entrap characters in a whirlpool, or make a new “friend” on the fly as this slimy beast of the deep.

Playing with Polodio at your table

You’ve got a horse, a fish, and the tragic backstory of a pet tossed down a toilet. What’s not to love about Polodio?

To bring this monstrosity to your table, take a look back at all of the animal companions and familiars the characters have discarded, waved off, or forgotten. Pick your favorite and bring them back into the story by having them form a symbiotic relationship with Seataur (use Polodio’s statistics). Perhaps the two have melded together and are now a mesh of limbs or the former friend has been swallowed whole by Seataur and now safely dwells in a pocket dimension. No matter how you detail the union, the combined creature will be brimming with high ability scores and plenty of ways to make your characters regret ever crossing a creature as harmless as a quipper.

For companions, look no further than waves and waves of beasts. Nothing will make a party crumple faster than having to face off against swarms of adorable cats that have aligned themselves with Seataur. For an underwater encounter, check out the following adventure hook, which doesn’t follow established lore from Battle for Beyond.

The ghost of Stardot Reef

The Longshore is a sleepy tavern on the docks. You can order mulled wine, take a seat by the window, and watch the waves draw in and out like long drawn breaths. On clear nights like these, you can see Stardot Reef, glinting purple and blue from beneath the waters.

Folks at The Longshore are occupied with the weather and how business is going. It’s a quiet night. That is, until the tavern doors fly open and a fisherwoman who’s soaked to the bone stumbles in and crumbles at the nearest table. “My husband!” she shouts. “I saw him again!”

The Longshore is the stomping grounds of a small fishing town. Characters can hear gossip, be alerted to dangers on the roads, or just find a cozy spot to decompress after an adventure. Press some of the patrons of The Longshore for rumors, though, and you’re liable to hear a ghost story about Stardot Reef.

Stardot Reef sits just on the horizon, and any character that watches fishermen sail out in the mornings will notice that they take care to avoid nearing it. Local stories say a fisherwoman’s husband was attacked and killed at the reef and now haunts it, and that the purple and blue glinting you can see at night are the treasures it has collected from crashed ships. But the truth is much worse.

What happened at Stardot Reef

Laurel Bryn is the fisherwoman whose husband, Rin, supposedly haunts Stardot Reef. In truth, he is still alive but under the control of Seataur. Months ago, Laurel and Rin discovered that the coral at Stardot Reef is magical and could be sold at a high price to a far-off mage academy. Unbeknownst to them, the reef was protected by Seataur. When the couple began harvesting the coral, it filled the waters with purple and blue glowing speckles of broken coral and angered Seataur.

When the creature attacked, it destroyed the couple’s vessel and took Rin hostage. Laurel barely survived the swim back to shore. When she told locals that Rin had been killed, they sent a small group to retrieve his body. Instead, they encountered him. Mind-controlled, Rin attacked the group and ordered them to stay away from the reef lest their vessels are sunk as well. Since then, the town has shared rumors of ghost sightings and respected the warning it gave.

When Laurel stumbles into The Longshore, she has just returned from Stardot Reef, where she attempted to loot coral. Tormented by what she believes to be her husband’s death, she sought to gather enough coral to buy herself a way out of town. More than anything, Laurel wants a fresh start. Unfortunately, her attempt at looting the reef failed when she was attacked by Rin.

To put an end to Laurel’s misery and help the town, the characters will need to encounter Seataur and destroy it. Unfortunately, getting to Seataur will likely require the characters to convince a local to give them a ride to the reef or allow them to borrow a boat. That will be a tough sale.

When the characters arrive at Stardot Reef, Rin appears underwater and telepathically issues the same warning: leave or be destroyed. A successful Wisdom (Insight) check reveals that Rin is mind-controlled. If the party jumps into the water, they discover Seataur hiding deeper underwater and poised to strike.

Rin and Seataur are connected by a fleshy cord. It sustains Rin and allows him to survive underwater. Destroying the cord frees Rin, including from Seataur’s psychic grasp, and demoralizes the beast. This allows the party to escape but will not stop future attacks on vessels that approach Stardot Reef.

If the characters continue to fight, Seataur flees when he reaches 20 or fewer hit points. In such a case, he never returns to Stardot Reef.

Return of the dead

If Rin is safely returned to town, Laurel and the townsfolk are relieved. Though they cannot offer a large reward, the characters are treated to drinks and meals for the duration of their stay. If the truth about what Laurel and Rin did to anger Seataur comes out, the two are asked to leave. Otherwise, they quietly leave town on their own after 1d4 days.

Keep your friends close, lest they become enemies

You can catch Polodio and his symbiotic friend Seataur in Battle for Beyond. The six-part D&D campaign features other homebrew monsters, as well as a delightful cast of characters fighting for the chance to change one moment from their tragic lives. To celebrate the show, we’ve released Battle for Beyond Digital Dice Sets, found in the marketplace!

Culinary Chronicles of the Court Flower – All the Anime

What Is the Far Realm? A Timeless Land of Writhing Flesh and Elder Evils – Posts

Azusa’s Many Journeys | MAGIC: THE GATHERING