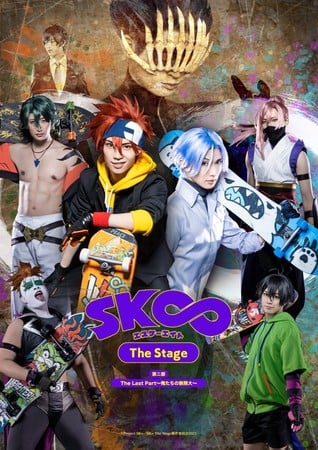 The official website for the stage play adaptations of the Sk8 the Infinity anime announced on Saturday that the second play in the project is canceling seven performances after a cast member tested positive for COVID-19.

The first stage play ran from December 2-12, and the second stage play was originally slated to run from January 15-24. However, the staff have canceled the seven performances that would have taken place between January 15-18. During that time the rest of the cast and staff will take COVID-19 tests. The stage play might move forward with performances starting on January 20 depending on the situation.

The original anime centers on Reki, a second-year high school student who loves skateboarding, and gets caught up in “S,” an underground and dangerous skateboard race with no rules at an abandoned mine. Langa, who has returned to Japan from Canada and has never skateboarded before, also gets wrapped up in S. Dirty racers, AI racers, and other unique individuals compete in the “youth skateboard race battle.”

The anime premiered on ABC TV and TV Asahi‘s “ANiMAZiNG!!!” programming block in January 2021. Funimation streamed the anime as it aired in Japan, and began streaming an English dub in February 2021.

The franchise will get a new anime project.

What Are You Playing This Weekend? (January 15th)

The Legend Of Heroes: Trails From Zero Is Getting A ‘Limited Edition’ Physical Release On Switch, Pre-Orders Are Live